Thomas Fosbery Handyside was born at the foothills of the Victorian Grampians and raised on a large sheep grazing property, held in the family for several generations. This way of life has instilled in Tom an innate understanding and respect for the Australian landscape that shines through his work today.

What attracted Tom to wine ?

Tom remembers fondly as a young boy, his father encouraging him to go into their cellar to select a bottle of red and a white for dinner parties. He’d try to open the bottle; the cork would break. Thankfully, with practice, Tom eventually got better at it! He’d go around the table serving the wine, enjoying the conversation and noticing the different, intriguing smells of the wines, despite not wanting to taste it – yet. Something was budding inside of Tom.

It took a trip to Europe at the age of 19 for Tom to discover the pleasure in cheap and cheerful Australian wine.

This newfound interest led him to a pivotal moment – taking a tour of St Emilion, where he insists he truly fell in love with exquisite wines. A later tour through the Napa Valley, California, brought another unforgettable moment – tasting an Opus One Cabernet blend created by famous Californian and Bordeaux winemakers – Robert Mondavi and Baron Phillippe de Rothschild.

After over two years of travelling, Tom returned home with no plans on the horizon. His parents had sold the farm on which he’d grown up, and they had downsized to another farm nearby. He remembers them asking him what he wanted to do?

Tom realised that their new property was bordered by two top vineyards – Best’s Great Western and Mount Langi Ghiran in the Victorian Pyrenees. It was one of those lightbulb moments – entering the wine industry would combine his love of wine and food, working outdoors, science, and nurturing the land.

When he told his parents he wanted to work in the wine industry, his mother exclaimed, “I can’t believe that! Your great-great-grandfather was a top wine consultant.”
The choice felt right. Tom’s never looked back.

Tom started at Montara, Ararat, assisting in the vineyard and with bottling. He soon landed a job as a cellar hand at Best’s Great Western winery. He was fascinated with some of their wines’ history, knowledge, and quality.

Tom headed to Lincoln University to study Oenology and Viticulture, returning three years later to do a vintage at T’Gallant on the Mornington Peninsula, then back to Ararat to work for another stretch at Montara.

Tom remembers warmly a very wet day in September 2002, training young vines with the Viticulture team, under the watchful eye of John Evans at Yering Station, Yarra Valley. He moved up to a supervisor role there for a spell and then into a position at Mount Langi Ghiran.

An opportunity to do a vintage with the Cullen, Margaret River region team presented itself. Tom swiftly raised his hand. During the subsequent two vintages, his keen interest in sustainability and biodynamics was developed by working with Mike Sleeger’s team.

Tom returned to Victoria for pruning season and was appointed Viticulturalist at Stratford Vineyard on the Goulburn River. The vineyard boasts 17 different varieties of wine, stretching over 570 acres.

Ever craving more experiences, Tom spent a brief time at Scorpo Wines on the Mornington Peninsula and then returned to central Victoria for a vintage at Sutton Grange before embarking on a short and sharp stint as property and vineyard manager at Bress, Harcourt.

Now that Tom had gained skills and knowledge in viticulture, working in different wineries and regions of Australia, the time was ripe for him to venture out and form his own Company – Focus Viticulture, now reborn as Handyside Viticulture.

He remembers his first client glowingly – Quinn wines (formally Langanook) – and they remain one of his most treasured vineyards. He redeveloped their trellis and management strategy and their sales team.

Tom was introduced to another vineyard in the Macedon Ranges, Rill House, which had just been sold to new owners. It had been growing Chardonnay, Sauvignon blanc & Pinot Noir for decades. Tom and the crew pulled out a section with wet feet and trunk diseases and commenced redeveloping the trellis system and management program. They continue to use sustainable practices and minimal intervention in their wine making process, producing award-winning wines.

Tom’s passion lies in redevelopment projects just like at Rill House – taking a vineyard or parts thereof from a neglected and unusable state and transforming it into a thriving, manageable, fruitful vineyard. He also derives great satisfaction from helping new vineyard owners to start their vineyard from scratch.

The fruits of Tom’s labours are tangible. The 2014 Le Grand Coq Chardonnay made by Bress exclusively from a block on the vineyard was awarded 96 points and placed in the top 8 Chardonnays in the Wine Companion. The following ’15 vintage was a wet, cool season, the fruit producing high-quality wines again. The ’17 My Deer Bride Chardonnay, now made at Shadowfax, was awarded three trophies and won Wine of the Show. Who knows what the future will hold?

Charmaine was born in Western Australia. Like Tom, she was raised on a sheep farming property and will always love and respect the land.

At 19, she moved to Melbourne to pursue an exciting job opportunity while continuing her Law degree with UWA remotely.

It wasn’t long before she was running her own farm in Landsborough, country Victoria. Having gained her pilot’s licence to fly herself and her dogs up to the farm for weekends meant she could maintain her Melbourne job and studies during the week. These were busy, thrilling times. But the years of drought brought the farm to its knees, and sadly, Charmaine had to sell. 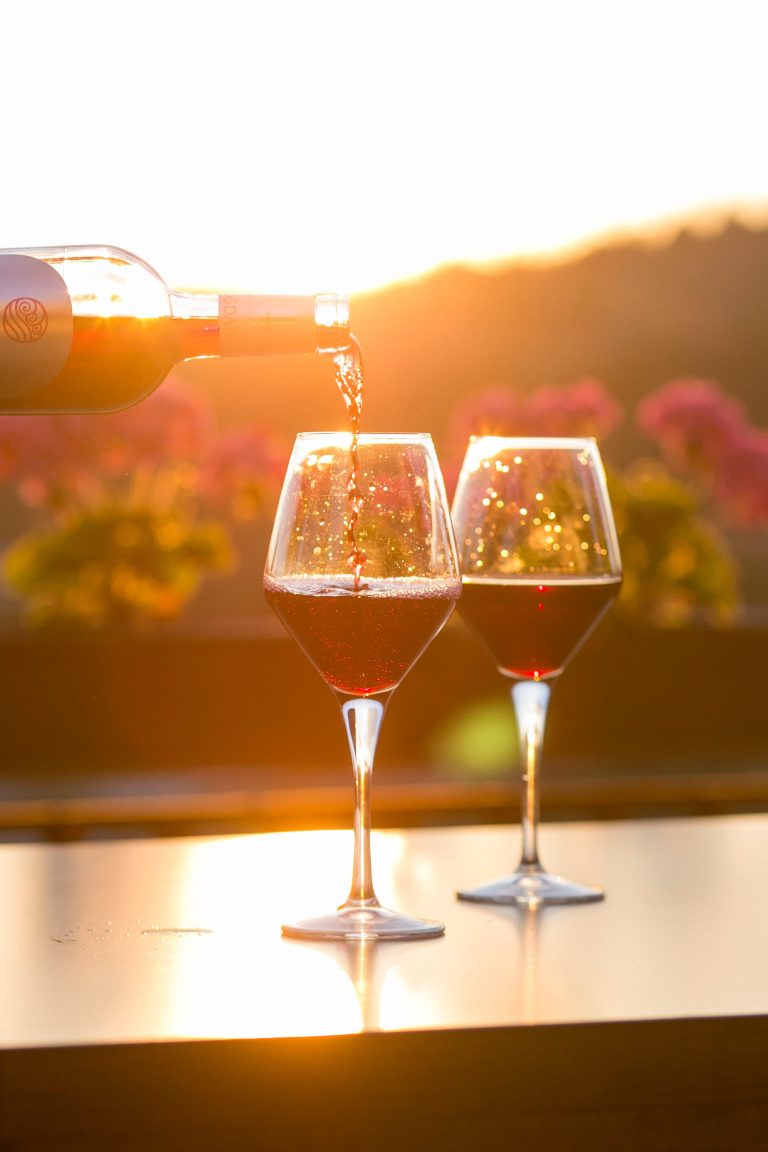 By now, Charmaine was content in Victoria. She would travel back to WA when attractive job opportunities appeared – like the one at Cullen Winery. At Cullen, she enjoyed tastings and learned a lot about the wine, particularly its structure.

Soon after this experience, Charmaine’s developing interest in wine led her to try her hand at running a wine bar in Kyneton, northwest of Melbourne. And one day, Tom came by offering wine from one of his wineries. They caught up from there, and the rest is history!

Charmaine is currently a Project Manager specialising in Corporate Restructuring and Technology transformation. She helps businesses by designing and implementing technology solutions.

Concurrently she is midway through a course in Entomology, something that has interested her for a long time. This knowledge, combined with her tech skills, allows her to offer Tom’s clients technology solutions to monitor their vines’ health. She can make sure there’s alignment with all the vineyards’ needs and help them to keep track of their documentation – saving vineyard owners time and money.

Tom and Charmaine’s mission is to help vineyard owners yield excellent results as fruit producers while ensuring that their vines can continue to be productive and healthy for years into the future.

They are passionate about helping vineyard owners make the most out of their vineyard while also protecting the environment and managing the land sustainably and respectfully.